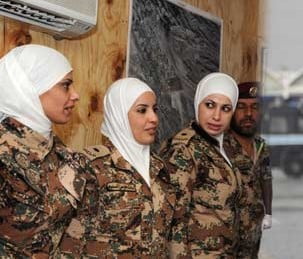 Her Excellency the Deputy President for Women’s Development Affairs, Dr. Al-Anoud bint Khalid Al-Aboud, confirmed that this comes within the future presidency’s plan for transformational initiatives (2024), which aims to raise the level of services provided in the Two Holy Mosques to the highest levels of quality in line with the generous aspirations of the leadership Al-Rasheedah – may Allah support her -, and to empower women and serve them to female pilgrims and visitors to the Grand Mosque, in line with the Kingdom’s vision (2030).

Al-Aboud stated that women have unparalleled support from His Excellency the General President for the Affairs of the Grand Mosque and the Prophet’s Mosque Sheikh Professor Dr. Abdul-Rahman bin Abdulaziz Al-Sudais, because of the high educational qualification that Saudi women have obtained through distinguished educational institutions inside and outside the country, and they are also distinguished in Performing her work and duties towards her religion and homeland, especially in the service of female pilgrims and visitors to the Grand Mosque, in light of what is provided by the government of the Custodian of the Two Holy Mosques King Salman bin Abdulaziz Al Saud and His Royal Highness Prince Muhammad bin Salman bin Abdulaziz – may Allah preserve them.

Al-Abboud appealed to all female workers at the Grand Mosque for more, saying: “You have excelled during the past years, and you have excelled in light of the current circumstances (the circumstances of the Corona pandemic), and this is evidence that Saudi women are able to give and contribute to the advancement of growth, so what we have to do is add to excellence, distinction, and creativity. We work in the purest areas and in the service of the guests of Rahman”.

His Eminence, The Sultan Of Sokoto, and President-General, Nigerian Supreme Council For Islamic Affairs, Alhaji Muhammad Sa’ad Abubakar has urged the fourth board of...
Read more
News

In line with the Federal Government's determination to make the dream of Hajj pilgrimage a reality for Muslim faithful, a seamless easy-payment plan tagged,...
Read more